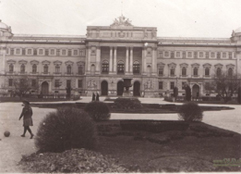 The Faculty of Applied Mathematics and Informatics starts its history from 1956-1957 academic year. It was when the group of students led by the professor Kostovskiy on the basic of the Faculty of Mechanics and Mathematics started their first training in computational mathematics and programming. The first graduates of this specialty were in 1959. The big amount of graduates was sent to continue their researches to the Institute of Cybernetics, Academy of Sciences of Ukraine (Kyiv). At that time it was also called the Computing Centre of the Academy of Sciences of Ukraine, which was founded in 1957 by Academician Glushkov.

In 1958 in Lviv University the first in western region electronic digital computer “Ural-1” was installed, and the calculation center was organized. Since that time the intensive development of research papers in the spheres of applied, numerical mathematics and informatics started in Lviv University. There were works not only fundamental nature connected with the development of numeral methods, but also applied nature connected with the progress in electronic instrumentation and mechanical engineering.

The research work on the Faculty is carried out in the field of basic and applied researches, in particular, by the scientific school “Numerical modeling and optimization of physical-mechanical fields”, and in the scientific fields: numerical methods for solving nonlinear operator equations and problems on the extreme, numerical methods for solving integral equations, theoretical cybernetics. Since 1993 the Faculty holds annually the Current Problem of Applied Mathematics and Informatics International Conference. The results of scientific researchers are published in national and international scientific journals.

The lecturers of the Faculty of Applied Mathematics and Informatics regularly try to help secondary schools in Lviv and the region to organize the process of studying of informatics, the local and regional Olympiads and conduct training courses in specialized schools in Lviv and in other cities.

On the Faculty students have access to seven computer laboratories which are equipped with modern computers with high-speed Internet access, multimedia projectors and licensed software (provided in particular, by the Microsoft Corporation within the framework of cooperation with educational institutions DreamSpark, by ESRI (software for the design and construction of geographic information systems)).

Since 1997 the Faculty annually holds all-Ukrainian (since 2002-international) student conference of Applied Mathematics and Computer Science. The most essential results of students’ researches are published in scientific journals. In 2008 our students won golden medals and in 2016 – bronze medals in World Finals of the ACM International Collegiate Programming Contest. In the Ukrainian history that was the first time, when students managed to reach such goals in Olympiad in Informatics, and we are proud that those were our students.